Cooking up dreams at the Spencer-Penn Centre

One could expect to be fed well at a day-long seminar for people interested in starting a food-based business.

Wednesday at Spencer-Penn Centre, the tables in back were laden with muffins, bagels, candies and other delights as about 40 participants watched the speakers on stage at “Starting a Food-Based Business.” The food being offered (and quickly disappearing) was the creation of many of the workshop’s attendees – many who were there to learn how to turn those creations into businesses, and some who already had.

They also toured Spencer-Penn’s new Community Kitchen. A community kitchen is a certified facility, which means that the food products prepared there can legally be offered for sale, whether at a farmers market or a grocery store.

The workshop was sponsored by the center, the Martinsville-Henry County Economic Development Corporation (EDC) and Virginia Cooperative Extension (VCE).

Consultant Robert Donnan has been working with the EDC on a project having to do with “assessing the possibilities that some specialty food product manufacturer could assist in promoting Martinsville as a destination and be displayed in restaurants in uptown and the farmers market,” he said.

“As part of this overall effort, we wanted to find a public kitchen to use as a starting-off place … to start food businesses.”

Average business start-up costs can be $25,000 to $100,000 for the first three to five years, according to materials provided by Nartea.

“Instead of investing in a space and equipment,” Spencer-Penn Centre Director Mary Jordan said, new professional cooks “can rent our kitchen to start it (a business) and save their money to buy their own place.”

The kitchen is equipped with two commercial, double-door refrigerators, two convection ovens, a six-burner electric stove with an oven, a proofing cabinet (which keeps food warm), a dishwasher, an ice maker, a triple sink and stainless steel tables. People would have to bring their own pots, pans and utensils.

The cost to rent the kitchen is $25 an hour. Jordan told attendees that it would be useful to rent for catering and for making specialty food products to sell.

Carlisle School literature teacher Becki Vasquez asked if teachers would be able to bring their classes to use the kitchen. Jordan replied that the idea had not come up before, but it probably would work out.

Anderson gave his take on children in a commercial kitchen: “If they’re old enough to help, fine. If they’ve got their fingers in the bowl instead, maybe not.”

Jordan said she hoped the kitchen also would be used for classes and workshops. A canning class will be offered by the Virginia Cooperative Extension Saturday, Aug. 15, from 10 a.m. to 3 p.m. at the Community Kitchen. Agents will teach how to can vegetables, tomato products, meat, jelly and more.

Before renting the kitchen, a person must be certified in food safety and sanitation from a Spencer-Penn workshop or provide proof of such training within the past three years. The workshop will be held Wednesday, Aug. 26, from 1-5 p.m. It will be taught by the Virginia Cooperative Extension.

To rent the kitchen, a person would have to turn in an application form, proof of food safety training and a signed copy of Spencer-Penn’s policies.

“We’re gonna kill a lot of trees (from paperwork), but that’s government, isn’t it,” Jordan said, chuckling, then suddenly turned to Anderson, a state employee, and said, “Excuse me, excuse me,” as the tour’s audience laughed.

The kitchen originally was used to prepare meals for students when the Spencer-Penn Centre still was a school, but when the school was closed, it was stripped of equipment, Jordan said.

New equipment was bought for it and the kitchen was finished in January. Jordan said that the kitchen had been used for making the concessions sold at Spencer-Penn music shows, “but we wanted to maximize the use of the space. We hope the community can have a need for it.”

Jordan said that she would like ideas and suggestions from the community and would act on them if possible, so that the kitchen would suit local needs: “We want it used.” 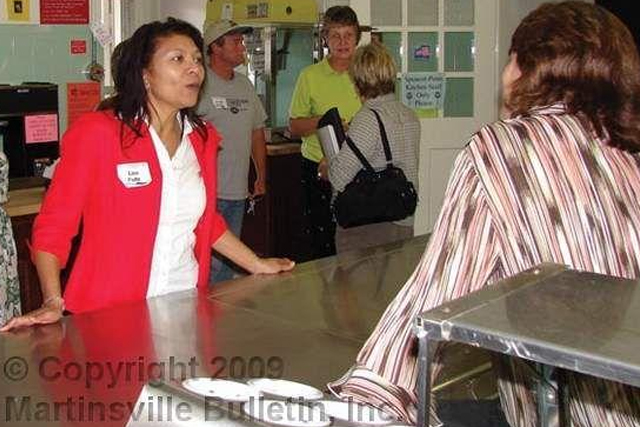